The Pride of Africa – the best of African Rail Travel

Since its establishment in 1989, Rovos Rail has earned an international reputation for its truly world class travel experiences.  Step aboard the wood paneled coaches, classics remodeled and refurbished to mint condition, and enjoy fine cuisine in five-star luxury as some of the most varied scenery imaginable unfolds beyond the windows.  Recapture the romance and atmosphere of a bygone era, when privileged travelers experienced the magic and mystery of Africa in a relaxed and elegant fashion.  The trains, which may be hauled by steam, diesel or electric locomotives at various stages of the journey, carry a maximum of 72 passengers in 36 superbly appointed suites. 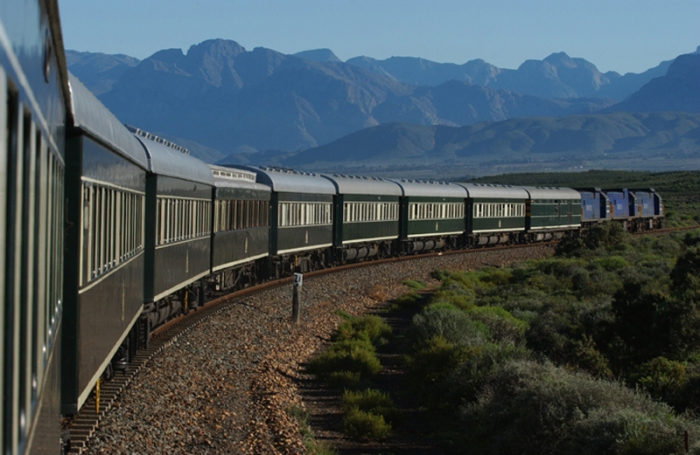 Rovos Rail operates two classic 20-coach, 72 berth trains as well as a third 13-coach, 42-berth Edwardian train which is available year round for charter.  Each one of these carriages, from kitchen cars to sleeper coaches and guards vans, has its own story.  A few dating back to 1911 were constructed in Europe and shipped to South Africa in the first half of the last century.  The coaches have been painstakingly rebuilt and the use fine wood paneling, traditional furnishings and period décor has ensured an atmosphere of elegance and grandeur.  Exquisite pillared dining cars are a signature of the Rovos Rail trains.  Each of the trains has two 42-seater dining cars to accommodate the maximum complement of 72 passengers in total comfort at one sitting.  Each train has a non-smoking Observation Car at the rear of the train, while the coach next to it contains a small smoking lounge.  A unique feature of the Observation Cars is the enlarged windows and open-air balconies. 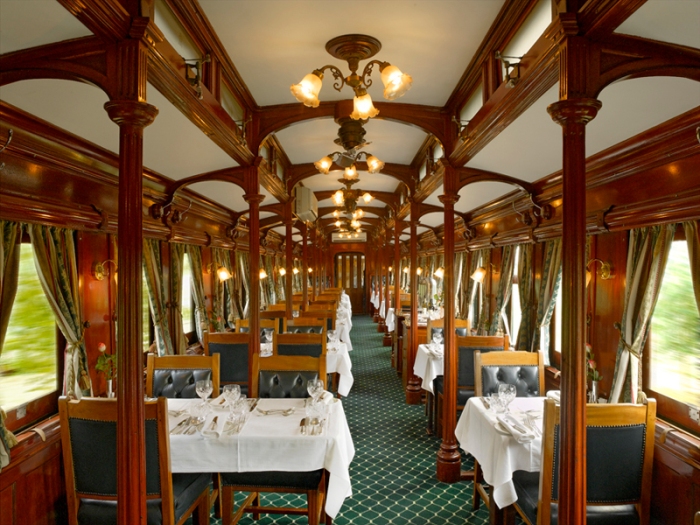 An enthusiastic team of chefs is responsible for overseeing the very important task of ensuring guests every need is catered for, while considerable thought and meticulous planning goes into making up the menus.  Unlike many of the great trains of the world, travelers are on board the trains for several days at a time, requiring a much wider selection of meals.  There’s an accent on fresh local ingredients, and traditional dishes such as game are a specialty.  Every morning there’s a full breakfast with dishes cooked to order.  A selection of cold meats, croissants, pastries, fresh fruit, yoghurts, cereals and preserves make up a tempting breakfast buffet.  For lunch and dinner there is a starter and a choice of fish, meat or vegetarian dishes, followed by a tempting dessert and are complemented by a selection of excellent South African wines.  All meals are served in one sitting only in the charming Victorian atmosphere of the Dining Cars.  In maintaining the spirit of travel of a bygone era, there are no radios or television sets onboard. 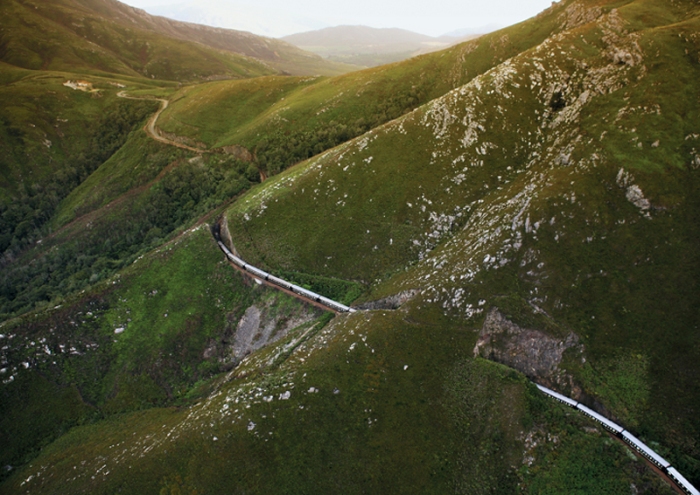 There is no finer way to see the country than on the popular 48-hour weekly journeys between Pretoria and Cape Town.  This 1600-kilometer journey is a perfect illustration of South Africa as a world in one country.  Travel the grasslands of the gold rich Highveld to the haunting barrenness of the Great Karoo.  Trundle through the spectacular mountain ranges and scenic wine lands of the Cape.  Journey’s end is Cape Town, the Mother City of South Africa, cradled by the imposing bulk of Table Mountain, Devil’s Peak and Lions Head.  Highlights of the north and southbound routes include a visit to the historic village of Matjiesfontein.  This authentic perfectly preserved Victorian Village, which was founded by Mr Logan as a refreshment stop in 1890, also boasts an impressive museum on the platform.  A stop is also made in Kimberley providing an opportunity to enjoy a city tour and a visit to the Mine Museum and the world’s largest man-made excavation, the Big Hole. 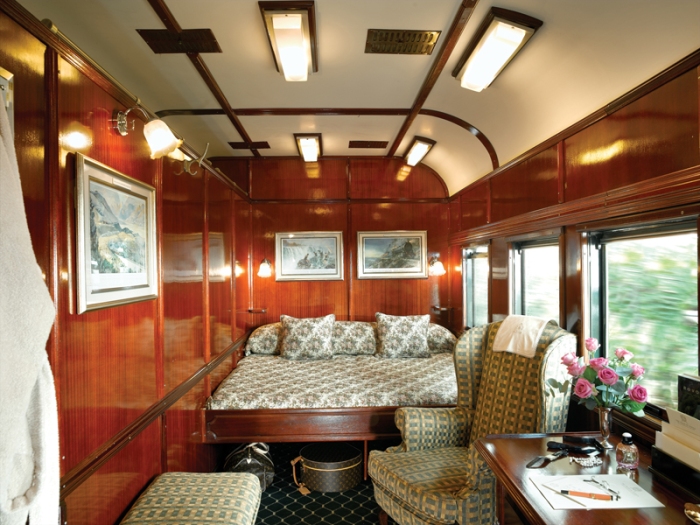 The special three-day safari between Pretoria and Durban departs during the summer months and includes game drives in two varied and unique game reserves.  The train departs in the morning from Rovos Rail’s Station in Pretoria and slowly meanders eastwards through the grasslands of the Highveld.  It then descends the escarpment between Belfast and Waterval Onder, taking the train through what is surely the most spectacular sundowner scenery in South Africa.  Awake in Malelane for breakfast as the train travels along the boundary of the world-famous Kruger Park.  The safari continues south towards Swaziland for an afternoon game drive in the Mkhaya Game Reserve.  Travel overnight to the Hluhluwe Game Reserve in Zululand, sanctuary of the endangered Black and White Rhino.  Enjoy an early morning game drive during which a large variety of game can be seen.  The train departs mid morning and winds its way through the lush cane fields and rolling hills of KwaZulu Natal, to arrive in Durban by late afternoon where this scenic safari ends. 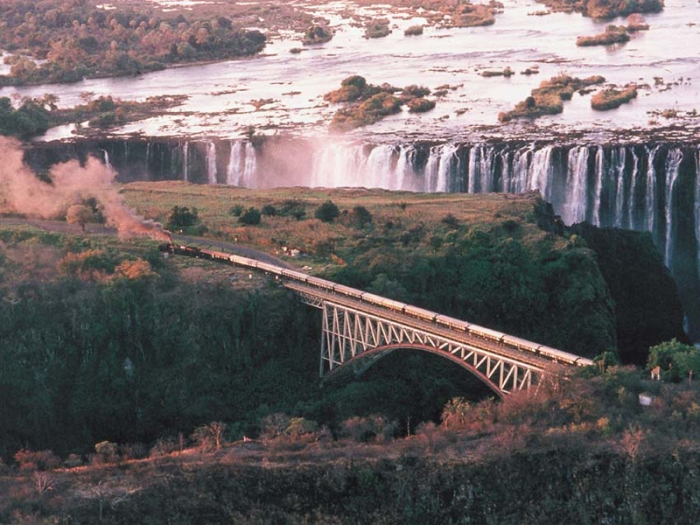 The two-night Vic Falls adventure begins as the train departs Rovos Rail’s gracious station at Capital Park in Pretoria.  This special journey departs in the morning and slowly meanders north towards Bela Bela, crossing the Tropic of Capricorn just after the station of Soekmekaar.  Once over the Soutpansberg mountains, north of Makhado we enter Baobab country.  Few sights are more evocative of primeval Africa than the eerie silhouette of a Baobab tree starkly outlines against a ruddy African sunset.  South African border formalities will take place at Musina and then, very slowly over Beit Bridge, the train will ease itself into Zimbabwe.  Continue in a north-westerly direction passing through Thompson’s Junction and Hwange Game Reserve where we enjoy an early morning game drive.  Journeys end is the incomparable Victoria Falls on the mighty Zambezi River. 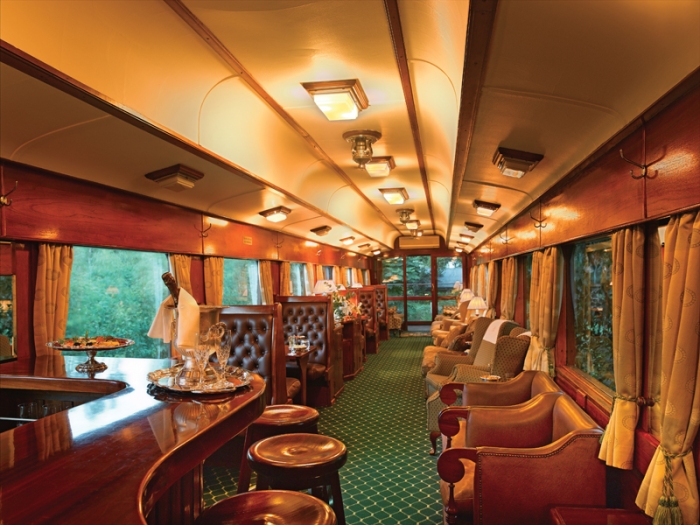 The picturesque 550-kilometre 24-hour George trip runs between Cape Town and George during the summer months and is rated one of the most beautiful in the world.  From the Mother City the train travels through the Du Toits Kloof tunnel towards Worcester.  Grapes are grown in vast quantities in this area, and apart from several co-operative wine cellars, there are a number of brandy distilleries.  The KWV Brandy Distillery is visited on the George to Cape Town leg.  The train continues along the Breê River Valley towards Robertson and then onto Ashton.  On the Cape Town to George leg a stop is made here to sample the wines of a local wine estate.  Then it is on towards the coast passing through stations such as Swellendam, South Africa’s third oldest town.  Leaving the coast behind the train passes near Mossel Bay, a commercial seaport that enjoyed a boom in the 1990’s due to the discovery of offshore oil.  George is a quiet inland town, founded in 1811 and named after King George 111. 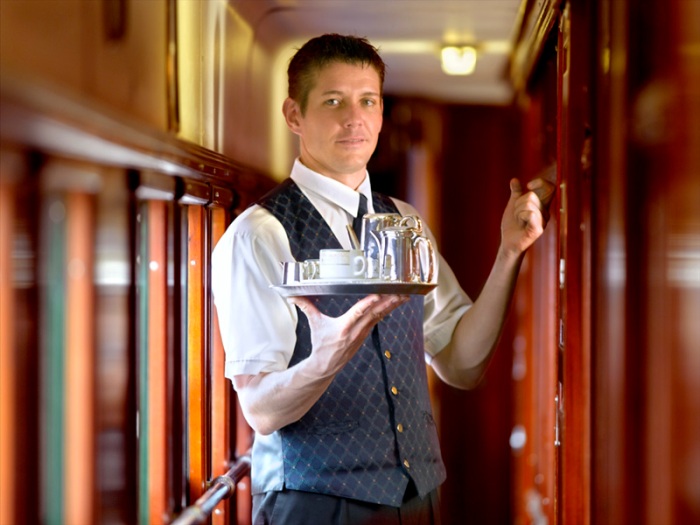 In July every year, the epic 14-day Dar Es Salaam journey travels through South Africa, Zimbabwe, Zambia and Tanzania and is one of the most famous train journeys in the world.  This magnificent sojourn will take you through South Africa with short tours of the diamond town of Kimberley and the capital city of Pretoria.  Then a two-night stay in a private game lodge in the famous Kruger Park Game area, before crossing into Zimbabwe, with another overnight stop at the Victoria Falls Hotel.  After crossing the mighty Zambezi River travel north eastwards through Zambia, joining the Tazara Railway line at Kapiri Mposhe.  Enjoy a bush walk and picnic at Kundalilia Falls, and continue the climb towards the Zambian/Tanzanian border, almost the midpoint between Africa’s two Great Rift Valley lakes.  Descend into the Rift Valley itself and enjoy spectacular scenery as the train negotiates the tunnels, switchbacks and viaducts of the escarpment.  Early on the last day the train passes through the Selous Game Reserve, the largest on the Continent – a vision of timeless Africa shortly before the bustle of arrival in Dar Es Salaam Station. 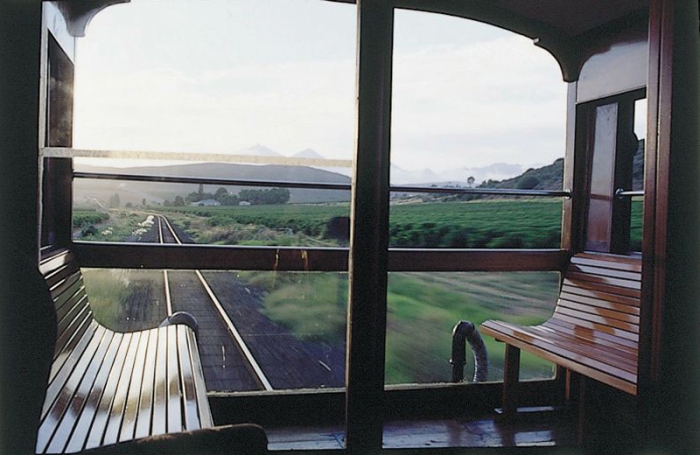 In May each year the 3400 kilometer 7-day Namibia journey takes the train from Pretoria to Kimberley, centre of one of the world’s most famous diamond rushes, where there’s an opportunity to visit the Big Hole, the world’s largest man-made excavation, and to savor the 1870’s atmosphere of the mine museum village.  The railway line covers the stark vistas of the arid Northern Cape as the train travels through Upington to the border into Namibia.  There is time for an excursion to the Fish River Canyon – second only in size to the Grand Canyon and a truly spectacular sight.  The journey continues across the untamed beauty of the Kalahari Desert and onto Windhoek, the capital of Namibia. After a short city tour and an afternoon game drive the train continues onto Tsumeb for an overnight stay at Mokuti Game Lodge in the Etosha National Park.  On the last morning the train passes along the German built railway through the Namib desert and into Swakopmund, a perfectly preserved nineteenth century German Hansa town set on the coast of the Atlantic Ocean.  Contact Road Travel Africa to be a part of this luxurious rail journey. 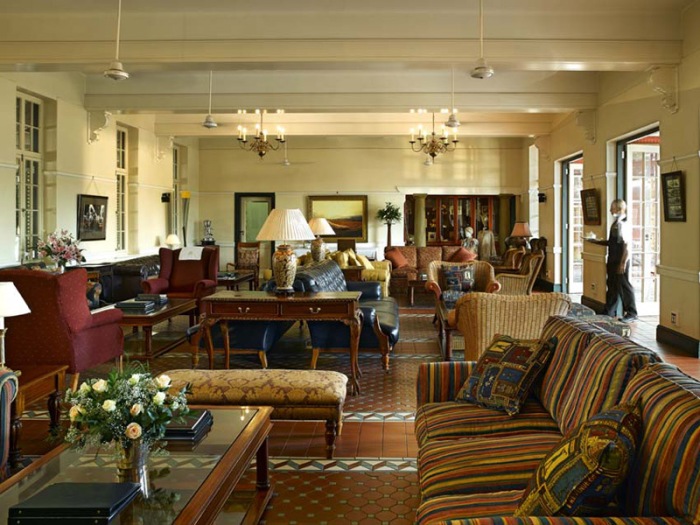