Beezy Bailey was born July 1962 in Johannesburg, South Africa.  He is a South African artist who works in several media, including painting, sculpture, drawing, printmaking and ceramics.  He received a fine art degree from Byam Shaw School of Art in London in 1986.

Bailey created a black, female alter-ego for himself in 1991, named Joyce Ntobe, born of the frustration of “increasingly prevalent affirmative action”.  Bailey submitted two artworks for a triennial exhibition.  One was with the traditional Beezy Bailey signature (rejected) the other signed Joyce Ntobe.  The latter now enjoys an honoured place in the South African National Gallery as part of its permanent collection.  When the curator of the Gallery wanted to work on a paper about three black women artists, Joyce Ntobe being one, Bailey let the cat out the bag which caused a huge media “scandal”.

In 1992 Beezy held “group exhibitions” by himself and Joyce at the Market Galleries in Johannesburg and the South African Association of Arts, Cape Town.  Joyce exhibited linocuts and sculptures.  At another “group show” by Beezy and Joyce in 1995 at the Goodman Gallery in Johannesburg, Joyce exhibited figures sculpted in clear resin and filled with objects including sweets, beads, lipstick and Vaseline.

“I am often asked what does that ship, or car, or high heel shoe mean.  I am not an illustrator; I release the images that appear before me.  Like Picasso, I say that it is not for me to explain the contents of my work; this is for the viewer to do.  Each of my works is a frozen dream.  Images & legends enter from my subconscious, the world of my imagination.  I am a conduit of visual messages greater than me, at best a messenger from God, at worst a Fallen Angel.“- Beezy Bailey, Cape Town, 2007 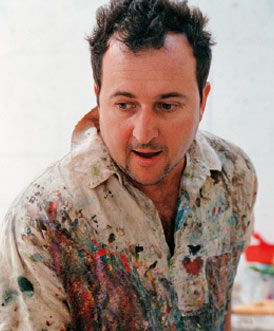 Bailey has been the driving force behind several art auctions benefitting various charitable institutions.  In 2004, he organized ART 4 AIDS, an auction which raised over R1 million.  In 2009, Bailey, along with Tara and Jessica Getty, organised the Art For Africa auction, held Sotheby’s in London.  The auction presented for the first time a major offering of works by some of South Africa’s leading artists, alongside pieces by some of the foremost contemporary artists from the UK.  The auction was held in support of two charities which fund and facilitate the care and support of orphaned and vulnerable children, the Africa Foundation and Ikamva Labantu. Beezy has exhibited in Germany, Austria, the Czech Republic and England, and has collaborated with a variety of artists from Zwelethu Mthethwa to David Bowie.  His work is represented in several art collections, including the David Bowie Art Collection, the Getty Family Collection as well as the Oppenheimer Art Collection.