Nieu-Bethesda is set in the fertile valley of the Sneeuberg Mountains, and lies in the heart of the vast, arid and dramatic territory known as the Great Karoo, in the Eastern Cape of South Africa.  The town was once a small but vibrant centre for the local farming community, but in the 1940’s and 50’s the village became eclipsed by the larger towns in the district and went into decline.

Helen Elizabeth Martins was born on 23 December 1897 in Nieu Bethedsa, the youngest of six children.  She gained a teaching diploma after attending school in Graaff-Reinet and in 1919 moved to the then Transvaal to begin working as a teacher.  In 1920 she married Johannes Pienaar, a teacher, dramatist and in later years a politician.  The couple lived on her brother Peter’s farm at Wakkerstroom in the Transvaal (now Gauteng), and appeared in theatrical productions together.  Helen also spent time in Cape Town and Port Elizabeth.  The marriage, however, was rocky, and Helen Martins left her husband on several occasions.  They divorced in 1926 after Pienaar abandoned Martins for another woman.

Around 1928 Helen Martins returned to Nieu Bethesda and spent the next 17 years looking after her ailing and elderly parents.  Martins’ mother died in 1941, and the father in 1945. Left with few prospects in a marginalized Karoo village, Martins became increasingly reclusive and isolated from the local community.  Known to the residents as ‘Miss Helen’ and thought of as a strange and rather outlandish character, she shied away from general contact, and began transforming her house and garden.  Although she avoided people in general, once a year at Christmas she would open up the house and invite the locals to visit, enhancing the mirrors, murals and crushed-glass coated walls with the light of many candles.

It is said that she lay ill in bed one night, considering how dull and grey her life had become, when she resolved, there and then, that she would strive to bring light and colour into her life.  That simple decision, to embellish her environment, was to grow into an obsessive urge to express her deepest feelings, her dreams and her desires.  It is not known in what order the work was done, other than that the interior of the house was virtually completed before the exterior was begun.  There was no overall plan, but what began as a decorative quest soon developed into a fascination with the interplay of reflection and space, of light, dark and different colours.

From the mundane articles that surrounded her, Helen Martins extracted and manipulated an emblematic language of sun-faces, owls and other images.  This is all set against a luminous backdrop of walls and ceilings coated with elaborate patterns of crushed glass imbedded in bands of brightly colored paint.

In order to accomplish the transformation of her environment, Martins hired the services of local workmen.  First Jonas Adams and then Piet van der Merwe were employed with structural modifications to the interior of the house, mostly replacing windows with the vast panes of glass that bathe her home in multicolored light.  `

In 1964 Helen Martins employed Koos Malgas, an itinerant sheep shearer, to help her make the cement-and -glass statues which fill the Camel Yard outside her house.  Formally the garden, this sculpture yard had over 300 figures and animals.  Helen Martins was especially fond of owls and considering them a kind of totem animal, associated with intuition and insight and wisdom.  Malgas became her foremost friend and companion, and remained by her side for the last 12 years of her life.  Helen’s close relationship with her Colored assistant was viewed with great suspicion by Nieu Bethesda’s Apartheid era residents. 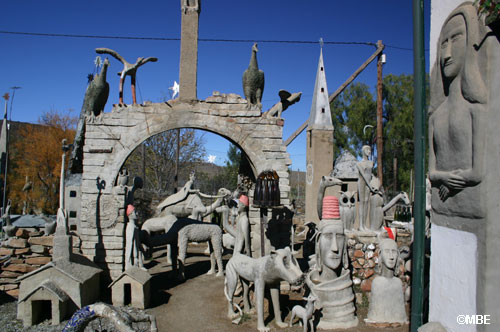 Her favourite animals, owls and camels, and all manner of real and fantastical beings are to be found everywhere.  Drawn not only from Christian, but also eastern religious icons, all the figures in the Camel Yard face east.  This feature also inspired the title of writer Athol Fugard’s play in 1985, The Road to Mecca, later made into a film of the same name, that tells the sad story of the visionary artist who was shunned by her community.  The arched entranceway from the street, watched over by a stoic double-faced owl, is significantly barricaded by a tall mesh fence and a stand of tall Queen-of-the-Night cacti.  Like the elaborately bottle-skirted hostesses within the yard, this arch must have been intended to welcome the visitor into her ‘world’, but the fence speaks plainly of an increasingly troubled relationship between Helen Martins and the outside world.

It is certain that Helen Martins sought praise and attention through her work, but as time passed, and derision and suspicion grew in the village, she became increasingly reclusive.  She was notorious for not taking care of herself and as time, arthritis, and her arduous work took its toll she became shy of her appearance and took great pains to avoid seeing people in the street.  The friends she had, however, describe her as an intensely passionate person who became animated when discussing the latest ideas for her creation.  On a cold winter morning, at the age of 78, she committed suicide by swallowing caustic soda.  She could not bear the thought of going blind, a great theme in her life and work is light, and she was worried that she would be taken away from her life’s work.  She was discovered shortly after taking the mixture and removed from Nieu Bethesda to hospital in Graaff-Reinet, where she died three days later, on 8 August 1976. 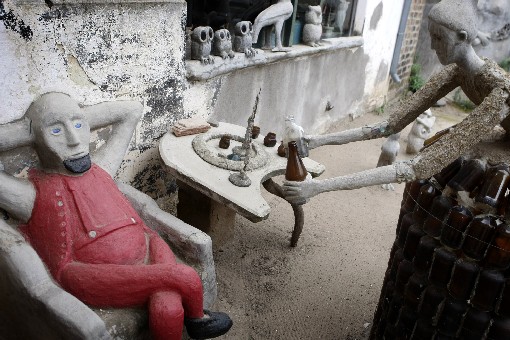 It was her wish that her creation be preserved as a museum.  Koos Malgas remained for another two years before relocating to Worcester, but returned in 1991 to assist in the restoration of the Owl House which had been declared a national monument and was supported by the newly created Owl House Foundation.  Today, the Owl house is the main tourist attraction of Nieu-Bethesda, which, because of the lack of development, has a rare historical and architectural integrity.  Helen Martins’s desire to be recognized as an artist is magnificently realized in the attention the Owl House receives, and in the fact that her artwork, once an object of derision and embarrassment, has become the most important asset of the village.  Contact us at Road Travel to find out more about this beautiful part of South Africa.