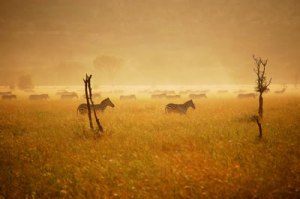 You’ve seen it on television and maybe even went to watch the IMAX version.  You’ve read about it and probably dreamed of one day witnessing it first hand.  It is something that can still inspire wonder at the amazing planet we live on: The Migration.  This extraordinary annual trek that wildebeest and other grazing herbivores embark on across the Serengeti-Mara ecosystem is one of the greatest spectacles in the natural world.  Over two million herbivores partake in this journey, with about 200 000 zebra and 500 000 Thomson’s gazelle behind the main players… one-and-a-half million wildebeest!  To be on the endless plains with thousands of animals galloping around you while the red dust of Africa hangs in the air is a dramatic experience that you can only fully understand once you’ve been there yourself.  It is the one thing that really is much better in real life than on the big screen. 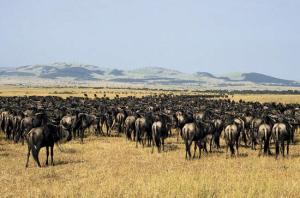 Between April and May, the main food source (grass) is depleted in the southern Serengeti, the herds start moving to the plains and woodlands of the Serengeti’s western corridor. The migrants suffer a high mortality rate due to injury and fatigue, so large numbers of griffon vultures follow the herds on their journey. Northwest from the short grass plains is the Grumeti River. This watercourse is the first real obstacle and gigantic Nile crocodiles of up to 6 meters in length are waiting for the hesitant wildebeest to stumble at the crossing. Their livelihood is inextricably linked with the great migration. Moving with surprising stealth and speed, they prey upon the thirsty herds as they drink from and cross the river. 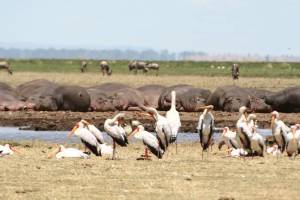 Road Travel can offer the following scheduled safari, inclusive of: Return economy airfares with Kenya Airways from Johannesburg to Kilimanjaro airport, including airport taxes, Transfers to and from Kilimanjaro Airport with English speaking driver guide, Accommodation on safari, full board basis (breakfast, lunch & dinner), Use of 4×4 stretched vehicles, Unlimited game drives during the safari, Services of your professional and knowledgeable Tanzanian English speaking driver guides, All national park entrance fees, ½ litre of water per person per day during game drives, Comprehensive support from our operational office in Tanzania for the duration of the safari, Travel information pack, and Free postage of travel documents.  Contact us to find out more.

Day 1
Meet and greet at OR Tambo airport at the Kenya Airways check-in counter two hours before the scheduled departure time. Kenya Airways (via Nairobi) from Johannesburg to Kilimanjaro Airport (depart: 11h15 – Arrive: 19h00).  You will therefore touch down in Nairobi and board another flight to Kilimanjaro.  At Kilimanjaro the friendly safari team will wait to take you to the Mountain Village Serena Lodge.

Day 2
After breakfast, drive through the local town of Mto wa Mbu (Maasai for Mosquito Village) to Lake Manyara National Park followed by an afternoon game drive in the park with a picnic lunch.  The Lake Manyara National Park includes a variety of habitats, making it possible to sustain a wealth of wildlife in this relatively small area.  The main habitats include the shallow soda lake itself, which occupies 70% of the National Park total area of 320 sq. km, the ground water forest, open grassland, acacia woodland and the rift wall.  The famous tree-climbing lions are the most famous spectacle in the park, so look out for Simba and family lazily lounging among the branches of the acacia trees.  Lake Manyara National Park contains over 400 bird species found in most savannah and river habitats in East Africa.  Common water birds to be seen here are pelicans, spoonbills, Egyptian geese, hammerkops and the migratory flamingos, which arrive in hundreds of thousands, creating one of Africa’s greatest natural sights over the soda lake.  Overnight at Lake Manyara Serena Lodge. 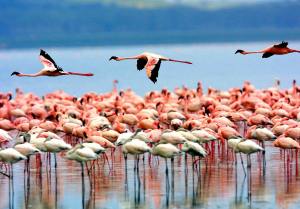 Day 3
After breakfast drive from Lake Manyara to Serengeti National Park.  En-route to the Serengeti you can opt to visit a Maasai Village near Ngorongoro Crater. (The Maasai charge US35 per person. The proceeds are used to buy water and other necessities for the tribe that you will visit.  Your package does not include this fee and therefore your entrance to the village will be for your own account.)

After bidding the Maasai farewell, you’ll visit Olduvai Gorge, a famous archaeological site.  The gorge lies on the site of an ancient lake, covered by thick layers of volcanic ash, which carefully preserved the world’s earliest records of mankind and which was unearthed by the dedicated Leakey family.  The museum displays some of their fascinating discoveries and remarkable finds.  Enjoy your picnic lunch at the Naabi and before you realise it, you’re standing at the entrance to the endless plains of legend: the sensational Serengeti Gate, followed by an afternoon game drive en-route.  From here your guide will take you to the Serengeti Serena Lodge that will be your home for the next three days.  Your stay here includes breakfast, lunch or picnic lunch and dinner.  The Serengeti covers a vast area of over 14,763 sq. km and is home to the most spectacular concentration of game found anywhere in the world.  Its wild, untouched beauty is the subject of many great books and films. It is Tanzania’s largest national park and boasts the big five as well as over 35 other species of game animals and an astonishing selection of bird life… The legendary migration adds to the uniqueness of the park, with well over a million animals stampeding across the plains, usually during April, May and June.

Day 4 & 5
Breakfast at the lodge or a breakfast box.  Enjoy your two full days in Serengeti National Park with morning and afternoon game drives (or a full day game drive) with a choice of lunch at the lodge OR a picnic lunch box.  This is a time during which you can just relax and enjoy the vast beauty that Africa has to offer.  The Serengeti is one of the few places in Africa where game sanctuaries have remained completely unspoiled.  Overnight at Serengeti Serena Lodge with breakfast, lunch and dinner included.

Day 6
After breakfast, enjoy a morning game drive in Serengeti National Park with a picnic lunch at the park gate before driving to Ngorongoro Crater.  Overnight stay at Ngorongoro Serena Lodge with breakfast, lunch and dinner included.  The Ngorongoro Conservation Area covers 8300 sq km, of which the renowned Ngorongoro Crater only makes up about 3% – equal to approximately 260 sq km.  The conservation area also encompasses the volcanic area around the Ngorongoro Crater including the still active volcano of Oldoinyo Lengai and the famous Olduvai Gorge.  Its centrepiece, the Ngorongoro Crater, is the largest unbroken caldera in the world.  It is often referred to as the eighth wonder of the world and the first sight of it is truly breathtaking.  Standing on the edge of the crater, you have a postcard view of picture perfect clouds floating above a deep purple crater ring.  And in the bowl below Africa has spread a patchwork blanket of greens and pinks dotted with animals.  The crater floor houses a big population of varied wildlife, including the almost extinct black rhino.  Animal densities are high, and game viewing is excellent.  You will be able to get “up close and personal” with the animals.  But that treat will have to wait until tomorrow.  For now you’re going to Ngorongoro Serena Lodge for another dose of the unparalleled Tanzanian hospitality that you’ve grown accustomed to by now.

Day 7
After breakfast, descend 600 m into the magnificent crater for a half-day (6 hours) crater tour.  You will witness an unforgettable spectacle of African wildlife – a world teeming with animals.  Supported by a year round water supply and fodder, the park supports a vast variety of animals.  Another big draw to this picturesque park is it dense population of predators, which includes lions, hyenas, jackals, cheetahs and the ever elusive leopard.  We will enjoy a picnic lunch at the hippo pool near the Mandusi Swamp.  You will also drive through the haunting forest and feast your eyes on some of the most spectacularly green vegetation you will ever see.  Later in the afternoon, you will ascend to the crater rim for the drive to Arusha, back to beautiful Mountain Village Serena Lodge with breakfast & dinner.