Van Gogh of the Karoo and Patchwork Philosopher 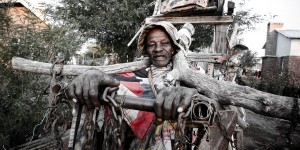 Outa Lappies died tragically in the early morning of Thursday 7th July 2011 due to burn wounds he obtained from walking around his fire, which set his cloak alight.  Many articles have been written and stories told about the man known as Outa Lappies (real name Jan Schoeman). He has featured large in the artistic history of the Karoo and especially the village of Prince Albert.  Described in the foreign press as a “Green Peace Activist” and locally as the “Patchwork Philosopher and Karoo Artist”, he is all of these and more. 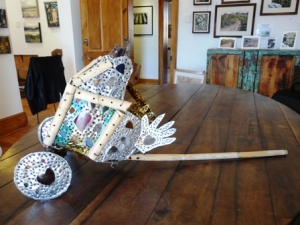 “To the authority I was rubbish, just a piece of shit. I vowed to prove to them that everything has value. My story is a simple story. Scrap is my study. My father told me: “If you turn your hand upward to beg – you become a slave. If you turn it to the earth, you become a man.” I have made a life from my hands. This life is hired out to me to decorate this earth with glee! I want to give people a message of hope in the form of a lighthouse, and to inspire the youth with a message of moving forward in the form of a wagon. As soon as it starts getting dark, I carry out the lanterns and put a candle inside. Some are hanging in the trees, some are in the sunflowers or on the ground. Then the garden is lighting. Then you see what the meaning of wonders is and what the meaning of life can be, when you make something from nothing with your hands.”
(From the exhibition ”Talking Rubbish”) 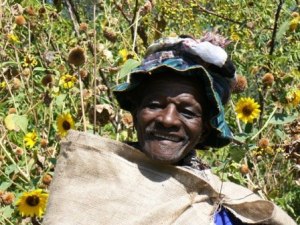 Schoeman´s art is a visual document of his life: The nomad who wandered the valleys and flatlands of South Africa, picking up rubbish and pulling his rickshaw made from flattened tin cans, weathered wood, wire and broken coloured glass. He calls himself Outa Lappies, and his work revolves around lanterns and patchwork made of material picked up during the travels. Since childhood he has kept a visual journal of his life in hundreds of embroidered chapters on cloth. “This is the book of my life,” he says. Johannes Schoeman´s work has been shown at major exhibitions by galleries in Belgium, Germany, England, Australia and the United States. He is also represented in The Fransie Pienaar Museum in Prince Albert, South Africa, and in 2000 he was chosen to be the ”Western cape personality of the year”. 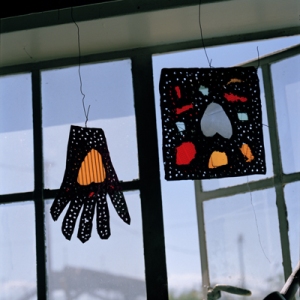 Outa Lappies was truly an inspiration to us all. Here’s a small article about him: Legacy of a loner: Something out of nothing: Jan “Patchman” Schoeman also known as Outa Lappies 2006-04-01

Some refer to him as the “Van Gogh of the Karoo”; he himself is rather fond of this label. Although the only connection between himself and the great Dutch painter is a certain fondness for sunflowers. Until quite recently, his address was a tree by the side of the road. He works with an almost obsessive zeal, toiling by candlelight late into the night, with only his trusty radio and the occasional lighted windows of passing trains for company. And his calling in life: to make something out of nothing. 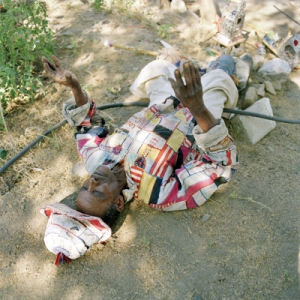 Jan Schoeman is better known as “Outa Lappies” or “Old Patchman”, a nickname he earned after choosing as his uniform a colourful ensemble of patches sewn onto hessian, in protest of children teasing a boyhood friend for wearing tattered clothing to church. “Outa”, as he calls himself, is a product of his environment; he was forged in the kiln of the harsh and magical Karoo. Born Jan Schoeman, to Stefaans and Delia, two “karretjie” people who travelled the length and breadth of the region in search of work as sheep shearers, he grew up on various sheep farms and on the road, left the Karoo several times due to his obsessive need to journey, but eventually returned “home”, after travelling the obligatory “ten thousand miles” he had set himself as a goal. This he did pulling his hand-made rickshaw, which usually trailed a train of smaller wagons. At night, he would park by the side of the road and sleep in the veld, and his rickshaw, lit by candles, would resemble the lights of the passing trains which have always formed part of his life and imagery. 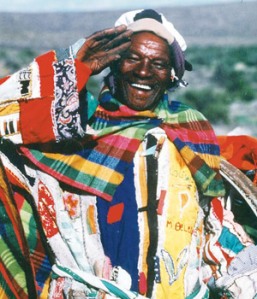 The tale of his birth – and the story of his life – has strangely Messianic undertones: he often talks of his entry into the world underneath a “koeniebos” on a Karoo farm, and of his father’s expressed hope on the night of his birth that he was perhaps the one who would make something out of nothing. “Dankie Heer, dit is verby. Miskien is dit tog hy wat iets uit niets sal regkry.” Like the Christ figure, he was for years a man with no home, who travelled great distances on foot, who loved all creatures equally and who during these journeys shared his message and his philosophy with everyone he met. And maybe, also like Christ, he will only truly be honoured, and his true value realised, after his death.

There are three phrases that he loves quoting: “Ek maak iets uit niets.” – he did choose to live his father’s wish by creating craft out of recycled materials. “Ek is gestuur om die aarde te versier.” refers to his almost obsessive compulsion to decorate – at the farm Botterkraal, where he worked in the veld for years and slept in a tree at night, there are still Helen Martins-like cement-and-glass sculptures in a wall. At his humble current home at Prince Albert Road, his garden is abundant with sunflowers and cherry tomato vines, a splash of colour and life in a dying community. Another quote refers to his recipe for happiness: “Besige hande en ‘n rustige hart.” This is represented by the outline of a hand, with the shape of a heart in its centre, which features in most of his work.

Most people regard Jan Schoeman only as an eccentric and a “character” – he won the 2001 Western Cape Tourism Personality of the Year award – and at best the maker of interesting crafts. These days he mostly makes “lighuisies” – lanterns assembled from scrap metal and colourful shards of old glass, which he sells to visitors local and foreign. Even British first lady Cherie Blair can boast a “lighuisie” at her London residence, as Outa made one for “Baas Tony Glair” (sic) and simply found somebody to get it delivered to No. 10 Downing Street. (Her handwritten thank you note, on heavily embossed official stationery, languishes somewhere in a pile of dusty papers in his small house…)

But his most valuable legacy – and his contribution to the outsider art genre – was and is what he refers to as his “chapters”, pieces of fabric on which Outa has embroidered his life story. They feature rhyming verses in a delightfully misspelled Afrikaans/Dutch/English pidgin, accompanied by characters and landscapes with Outa as the main protagonist: a vibrant embroidered figure in multicoloured patchwork clothing. Nobody knows how many of these there are – a website claims that he has created around 750; some say there are thousands. In order to make a living he has sold the bulk to mostly overseas buyers. Although he embroiders some of the work himself, he employs local women to do most of the needlework after drawing his designs and verses on the cloth. And he insists that each craftswoman embroider her initial and surname on the chapter.

The “chapters” recount his adventures throughout his long and unconventional life: his joys and his hardships while growing up and working on farms, and his life as a nomad who for many years chose to roam the roads and live outdoors.

One verse, in one of his earlier chapters (circa 1929) features some of his physical difficulties as a young boy with both Mother Nature and man (in the shape of his teacher):

Various chapters feature stories of his childhood with his travelling sheep-shearer parents and their outdoor life. He remembers his childhood as a joyous and exciting time:

His love for Nature and for what she provides, and for a loving and protective God, is something that runs like a golden thread through the verse-stories of the chapters:

Many people consider so-called “outsider artists” as loons or doodlers or, at best, makers of childish works of art and craft. But there’s more: except for the naiveté of their work, it often has a repetitive and obsessive nature, and speaks of the lives of unconventional loners who move on the fringes of society. Outa Lappies is an outsider by nature, and by choice. He has never lived with a family of his own. And he never finished his education – leaving school during his Grade Four year – he is fond of telling people that he has “Standard Two-and-a-Half”. Al these factors have worked together to infuse his “chapters” with the honesty and powers of observation of the loner. And also with the perseverance, humour, colour and tremendous joy of living close to Nature’s beauty, and her unforgiving harshness. 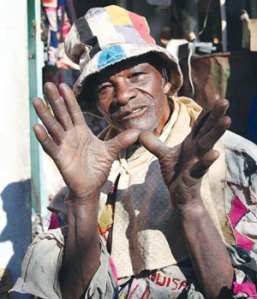 Outa is also something of a community figure; throughout his life he has fought for his rights and the rights of others. Several court cases with him as plaintiff are proof of this; not even the harsh laws of apartheid stopped him. He also provides work in the Prince Albert Road community, which is made up of mostly redundant railway workers – they collect old cans and bottles for him, they embroider and make clothes for him, they help with his garden. He feeds most of the stray animals in the area, and he always has a word of fatherly wisdom (usually more!) for the ragged kids roaming the area around the railway tracks.

In spite of all his qualities, Outa Lappies is yet to be recognised as an artist in his own country. Foreigners vie for his attention; they want to publish books on his life, and they want to organise exhibitions of his work in their countries. Lesser artists working with embroidered text and images on fabric are featured in top galleries, yet Outa is ignored by the major players in the art world. Whether this is because of his guileless lack of political correctness or the fact that Afrikaans is his first language, one doesn’t know. And maybe he will eventually have one more thing in common with his hero, Van Gogh: that he will only be truly recognised and honoured as an artist after his death. 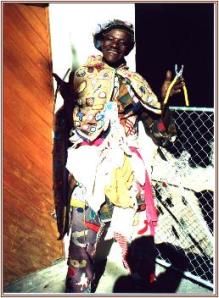