Tanzania scraps Serengeti highway plans – or has it? 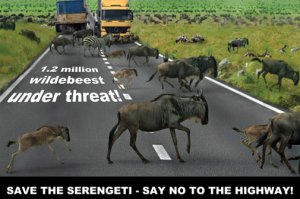 The government of Tanzania has announced that plans to construct a highway across the northern part of the Serengeti National Park have been shelved, but action group Save the Serengeti says it is not celebrating just yet.

A letter from Ezekiel Maige, Tanzanian Minister for Natural Resources and Tourism to UNESCO, says the 53km stretch traversing the Serengeti National Park will remain gravel road and will be used mainly for tourism and administrative purposes under the authority of Tanzania National Parks (TANAPA).

But Save the Serengeti says the problem with this statement is that no gravel road currently exists across this 53km stretch. It says much of this area is designated as a ‘Wilderness Zone’ with no public access.

What’s more, the road was initially announced as gravel. In a statement, Save the Serengeti says that over the past year the Tanzanian government has publically ‘given in’ and downgraded the road to gravel, despite the fact that it was never going to be a tarmac road.

“What is different now?” says Save the Serengeti. “The government curiously says that the current road across the same 53km stretch across wilderness zone will ‘remain’ gravel, though no such road exists. They do not exclude commercial use, stating that it will be ‘mainly for tourism and administrative purposes as it is currently’. And clearly, it will be the only connection between upgraded roads being planned on either side of the Serengeti.  Whatever route is now there, which is not much, will have to be upgraded to make this connection happen.”

While some regard the letter from Maige as a step in the right direction, many concede that it’s simply a departure point for future discussions. “We believe that the most recent position statement from the government of Tanzania provides the fundamentals of a formula that can resolve this dilemma between conservation and development,” says African Wildlife Foundation CEO, Patrick Bergin. “However, the details of implementation will be essential to its success.

“First, we hope the government of Tanzania will confirm the decision to construct a tarmac highway along the southern route from Mugumu to Arusha for east-west access. Second, we hope TANAPA will enforce all normal park rules for the unpaved section of the road in northern Serengeti including maintaining park gates, closing the road at sunset, charging park entry fees to all vehicles using the park road, and prohibiting commercial through traffic. If this southern road is built and TANAPA follows its normal conservation practices on the gravel road, this new plan could represent a workable and acceptable outcome,” Bergin adds.

Thanks Sue Lewitton for this (still rather puzzling) update 😉 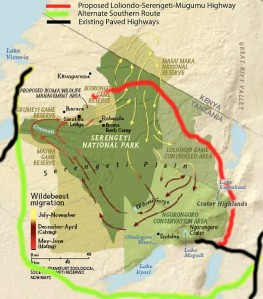