Constitution Hill, a Johannesburg human rights precinct and home of the South African Constitutional Court, blends elements of its notorious past as a political prison with a vision of a bright future.  While retaining its heritage, it incorporates the vibrant aspects that are a feature of our young democracy.  Constitution Hill is a human rights precinct and a world-class heritage tourist attraction incorporating cultural, historical, artistic, educational and recreational spaces that celebrate South Africa’s ability to negotiate a peaceful, miraculous democracy out of bloody oppression.

Constitution Hill is currently undergoing R6,1m renovations.  They are taking place in four sections of Constitution Hill: the Old Fort atrium and courtyard as well as Sections 4 and 5.  The project, which is sponsored by Blue IQ, should be completed by September this year.  The Old Fort Prison Complex, also known as Number 4, was built in the late 19th century to incarcerate black male prisoners.  Sections 4 and 5 were infamous for their high-profile prisoners and the appalling conditions in which they were kept.  Prisoners included Nelson Mandela, Albert Luthuli, Mahatma Gandhi and Robert Sobukwe.  Section 5 was previously closed for the public and will now be opened for the first time after undergoing the necessary refurbishments. 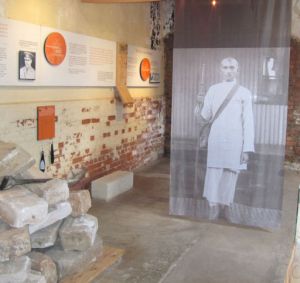 Darryl Petersen, Constitution Hill Site Director, says the renovations should rather be termed ‘conservation’ as the purpose is not to make the facilities look any prettier or to add anything new but to make sure the premises are safe to welcome visitors.  He says: “In order to open Section 5 to the public, we need to ensure the safety, integrity and structure of the building.”  Blue IQ ceo, Amanda Nair, explains: “Section 4 was part of the ‘Stop the Rot’ campaign, which was designed to do exactly what the name suggests.  As part of this project, it will be upgraded and key areas addressed.  Section 5 has received no attention until now and therefore as part of this project will form a primary focus area.  The intention is to activate this part of the site as currently tourists are unable to visit it.”

Works will include painting of the woodwork; repairs to face brick walls and existing steelwork; restoring existing woodwork, stonework and concrete; restoration of existing roofing and laying down new corrugated iron roofing sheets; as well as restoring the existing staircase and floors.  Further renovations include the restoration of several pavements in and around the Old Fort.  Nair says many of the pavements are characterized by decline and patchwork repairs are therefore necessary to ensure further degradation is avoided.  The Old Fort Atrium will also be restored, in particular the roofing structures.  The last renovations Blue IQ is focusing on are the conference rooms.  Nair says currently the value proposition of the conferencing facilities is limited and this requires attention.  She says: “Several rooms will be upgraded in both the Old Fort and the Women’s Jail to allow for larger, better serviced conferences.  In addition, meeting rooms will be created using existing currently underutilized spaces.”