The international food brand founded by Japanese born and bred Nobu Matsuhisa pledges a percentage of a special Omakase Menu at every Nobu to raise funds for relief in his country.  Less than two weeks ago, Japan was struck by the worst earthquake since records began.  The results have been catastrophic and now, the hundreds of thousands of displaced citizens in this country will be needing an enormous amount of support.  Already, relief agencies are hard at work, helping with getting supplies to people who lost loved ones, homes and their livelihoods. 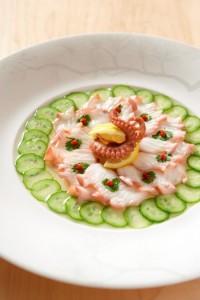 Moved by the plight of his fellow countryman, Nobu Matsuhisa, founder of the most famous Japanese restaurant brand in the world has pledged to donate a portion of sales from a special Omakase Menu to a relief organization.  This pledge will be in place at each of the twenty-three Nobu restaurants worldwide.

In keeping with this spirit, Nobu One&Only Cape Town will be offering a special Omakase Menu for R750, with R225 of this income donated to UNICEF for the people of Japan.  Diners indulging in the seven-course Nobu Omakase Menu that features signatures such as white fish sansho salsa, salmon anticucho and beef toban wasabi can enjoy their meal even more, knowing that they will be contributing to an extremely worthy cause.  The Earthquake Relief promotion at Nobu One&Only Cape Town runs until Sunday, 3 April 2011.  Nobu One&Only Cape Town is open for dinner only from Monday to Sunday inclusive.

A sweeping fan-like staircase at the One & Only Cape Town leads to the 104 cover dining area and sushi counter, which is framed by a textured, translucent origami light that glides along the ceiling. No stranger to international culinary influences, Nobu gives classical Japanese cuisine a contemporary twist.  Diners can indulge in fresh South African seafood and indigenous spices in mesmerising dishes such as Sake Roast Kingklip with Sansho Slasa or the Chocolate Bento Box; a dark chocolate fondant with reen tea ice cream and a sesame seed tuile.  The upper level Nobu bar features the largest selection of Sakes in Africa including plum wines, Japanese beer and a selection of Sake and Shochu based cocktails.