When Apartheid ended and the African National Congress under Nelson Mandela came into power in South Africa in 1994, the national holidays were changed to days that would be meaningful to all South Africans. 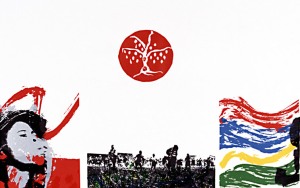 21 March: Human Rights Day – On this day in 1960 the police killed 69 people at Sharpeville who were participating in a protest against the pass laws.  Many were shot in the back and the carnage made world headlines.  Four days later the government banned black political organizations, many leaders were arrested or went into exile.  During the Apartheid era there were human rights abuses by all sides; Human Rights Day is but one step to ensure that the people of South Africa are aware of their human rights and to ensure that such abuses never again occur.

The  Bill of Rights contained in the Constitution is the cornerstone of democracy in South Africa.  The Constitution provides for the establishment of the South African Human Rights Commission (SAHRC).  The aim of the Commission is to promote respect for human rights, promote the protection, development and attainment of human rights, and to monitor and assess the observance of human rights in SA.  The SAHRC was launched on 21 March 1996, 35 years after the fateful events of 21 March 1960 when demonstrators in Sharpeville were gunned down by police.

The Native Laws Amendment Act of 1952 extended Government control over the movement of Africans to urban areas and abolished the use of the Pass Book (a document which Africans were required to carry on them to ‘prove’ that they were allowed to enter a ‘white area’) in favor of a reference book which had to be carried at all times by all Africans.  Failure to produce the reference book on demand by the police, was a punishable offence.  The Pan Africanist Congress (PAC) proposed an anti-Pass campaign to start on 21 March 1960.  All African men were to take part in the campaign without their passes and present themselves for arrest.

Campaigners gathered at police stations in townships near Johannesburg where they were dispersed by police.  At the Sharpeville police station a scuffle broke out.  Part of a wire fence was trampled, allowing the crowd to move forward.  The police opened fire, apparently without having been given a prior order to do so.  Sixty-nine people were killed and 180 wounded.  In apartheid South Africa this day became known as Sharpeville Day and although not part of the official calendar of public holidays the event was commemorated among anti-apartheid movements.

South Africa’s Human Rights Day, 21 March – declared International Day for the Elimination of Racial Discrimination by the UN – is synonymous with an innocuous but historic township, Sharpeville, situated between the industrial cities of Vanderbijlpark and Vereeniging about 50 kilometres south of Johannesburg.  For many South Africans, the day will always remain Sharpeville Day, a commemoration of the 21 March 1960 Sharpeville massacre, when the police mowed down 69 unarmed people and injured 180 others who refused to carry the hated dompas identity document that was meant only for indigenous Africans.

The day, sometimes also referred to as Heroes’ Day, was a watershed in the country’s liberation struggle, hence its inclusion in South Africa’s post-apartheid holiday calendar.

Joe Tlholoe, one of the country’s most prolific journalists, who was a high school pupil at the time, wrote years later: “With hindsight, the story is simple. The PAC [Pan Africanist Congress], which was 16 days short of its first birthday, had called on African men to leave their pass books at home, go to the nearest police station and demand to be arrested for not carrying the dompas.”

The apartheid pass laws humiliated African men in particular.  Every indigenous African male above the age of 16 had to carry the dompas on his person day and night and produce it on demand by the police.  Failure to produce, forgetting the pass at home, or not having the right stamp, meant arbitrary arrest and jail.

“When the police in Sharpeville saw the masses marching towards them, they panicked and opened fire, killing the 69 and injuring hundreds,” Tlholoe wrote. “The country went up in flames as anger spread through townships across the country.  More were killed in the days after Sharpeville.”

An outraged international community turned against the Nationalist Party government.  The struggle had reached a new level on the long road towards the country’s democratic elections on 27 April 1994.

“That is the simple story that historians will relate,” Tlholoe wrote. “The real story was a more complex mixture of pain and grief, suffering, anger and courage, that is best left to izimbongi, the African epic poets, to tell.”

March 21 1960 was the culmination of planning, public meetings and house-to-house canvassing by a young PAC that had broken away from the African National Congress (ANC) on 2 November 1958 and had its inaugural congress at Soweto’s Orlando Communal Hall between 6 and 8 April 1959.

Robert Mangaliso Sobukwe, a 34-year-old lecturer in African languages at Wits University at the time, opened the congress and was elected president. He spelled out the PAC’s policies and painted a picture of a South Africa after liberation that was non-racial, democratic and socialist.  In July that year, Sobukwe announced that the PAC would embark on a program of “positive action” against oppression.  In December he announced that the first target would be the pass laws.

Sobukwe led the march to Orlando Police Station, where he and the party’s leadership were arrested, just after they learned of the massacre in Sharpeville.  The journey to the recognition of basic human rights, now entrenched in the Bill of Rights in South Africa’s post-1994 Constitution, had begun in earnest.

In the aftermath of the massacre, following the declaration of a state of emergency on 30 March 1960, thousands of black people were arrested throughout the country.  On 8 April 1960, the Nationalist Party (NP) government, under the premiership of apartheid architect Hendrik Verwoerd, banned the PAC and ANC, forcing the two movements to go underground and eventually into exile.  The days of peaceful protest, so the ANC and PAC declared, were over.

What would follow was protracted guerrilla warfare, the armed struggle against the “regime” waged by the two organisations.  This would last 30 years, with the NP eventually forced into negotiations for a new dispensation with leaders such as Nelson Mandela, whom it had branded “terrorists”.

In December 1961, the ANC’s armed wing, Umkhonto weSizwe, detonated its first bombs.  Sobukwe, who was first sentenced to three years’ imprisonment on Robben Island for leading the anti-pass law protests, was kept in jail indefinitely under a special amendment to the General Laws Amendment Act – the Sobukwe Clause – which was rushed through Parliament.

Released from Robben Island and banished to Kimberley in 1968, Sobukwe was already ill, and died from cancer 10 years later. But the march for human rights and dignity continued.  In 1986, under heavy pressure, rightist president PW Botha repealed the pass and influx control laws which curtailed the movement of blacks in their country of birth.

The ANC-led government chose Sharpeville as the venue to launch South Africa’s new Constitution, signed by its first democratically elected president, Nelson Mandela, on 8 May 1996.  Since then, a number of laws have been enacted to protect basic individual rights in South Africa.

Among these are pieces of legislation that significantly provide for gender equality, and give citizens equal access to courts in the event of any form of discrimination.  Statutory institutions such as the Commission for Gender Equality, the Human Rights Commission, and the Commission for the Promotion and Protection of the Rights of Cultural and Linguistic Communities, also now exist.

On 21 March 2001, South Africa unveiled the Sharpeville human rights memorial on the site outside the police station where the 69 men, women and children were shot – most of them in the back. Their names are all displayed on the memorial plaque.

South Africa Human Rights Day is of critical importance in the lives of all South African citizens.  Since South Africa has a long history of Apartheid, where thousands of African and other people of ethnic origins were tortured by the white ruling class, this day has come to be a symbol of human rights guaranteed to all.

When African National Congress succeeded to power with Nelson Mandela as their leader, 21st March was instituted as the South Africa Human Rights Day and included in the list of National Holidays of South Africa.

South Africa Human Rights Day seeks to ascertain that the South Africans have developed an understanding of the various human rights they are entitled to and can protect themselves against human rights exploitation.