Warm Water Mountains and day two of the road trip

The first night was spent at the little Karoo gem “Warmwaterberg Spa”, this is a hot mineral spring situated between Barrydale and Ladismith.  The spa offers self-catering accommodation in old farmhouse buildings dating back to the 19th century, timber chalets and some parked caravans.  The Lapa has a restaurant offering country fare and a bar.  There are three outdoor pools, two hot and one cold. The temperature in the pools varies from 25 to 42 degrees C.  For those who would like to explore the vast outdoors, there is a hiking trail on the property as well as drives to nearby mountains and town. 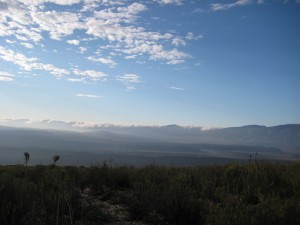 We need to make it very clear that this resort owns the words ‘rustic’ and their affordable pricing should be the very fist clue that you will not be getting warm towel railings and your bed will only be turned down in the evening if you do it yourself.  We originally discovered this little Karoo gem about ten years ago and since then we have recommended it and frequented it ourselves.  Surrounded by magnificent landscapes of rolling hills and mountains that turn into watercolor blues and purples in the evenings, the chief experience here is the hot mineral water; this is tested and rated by Swiss labs alongside that of Baden Baden in Germany. 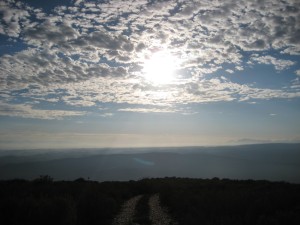 The history of the farm Warmwaterberg and the hot spring, which is situated thereon, is closely interwoven with the history of the Le Grange family who today, five generations and 119 years later, still remain in control of the property.  The first to make mention of the springs in his writings was William Paterson.

In June 1778 Paterson crossed the Langeberg over Platte Kloof to enter what he calls “Channa Land”. Then he turned westwards, crossing the Little Karoo and arrived at the springs in the evening with his comrade, Sebastiaan van Reenen, where they eventually spent three days. Warmwaterberg appears on maps as early as 1780, just a few years later.

It appears that the first farmhouse (opstal), today known as “Arende” and occupied by management, was only built in 1829 and is thus the oldest standing building on the entire property.  It was not until the 22 January1849, after H.J. Schutte, a Land Surveyor, surveyed and mapped the property, that a quitrent grant was made of the “loan-place called Uitvlugt geleegen aan Warm Watersberg”, when it was given by Sir Harry Smith to the brothers Leendert Jonannes Haasbroek (3/4) and Gideon Daniel Haasbroek (1/4).

After an early morning walk around the outskirts of the farm we enjoyed a slap up breakfast at the restaurant.  It was not long before we were on the road heading towards the Tradouw Pass.  The Khoisan originally discovered this ancient route.  The unusual word “tradau” means “the way of the women” and is believed to be derived from the Khoi words tra, signifying “women” and dau, denoting “way through”.  Magnificent galleries of rock paintings in the numerous caves are all that are left from the Khoisan era.

The Tradouw Pass is one of thirteen passes that master road engineer Sir Thomas Bain built in the Southern Cape during the 1800’s.  It is worth looking out for places with names like Drupkelder, Piekniekbos and Suurplaat where you can stop and try and spot the ruins of Anglo Boer War blockhouses.  The Tradouw Pass is renowned for its wild flowers in spring, clusters of blazing red aloes in late autumn, breathtaking waterfalls in winter and magnificent swimming pools in summer.  As you drive along, enjoy this beautiful Pass and admire Sir Thomas Bain’s genius for carving a pass through such rugged terrain without the help of modern technology.

Parking the car we walked down to the river and pools of crisp mountain water, after a lazy swim and some casual rock scrambling we headed back to the car and off to Suurbraak for lunch. 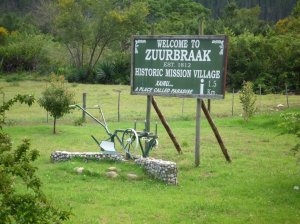 Suurbraak, “A Place called Paradise” is a quaint village, nestled amongst streams of running water and sheltered by giant oaks, situated 5 km west of the majestic Tradouw Pass.  This traditional settlement was established as a mission station in 1812 by the London Mission Society and later in 1875, taken over by the Algemeende Sending Kerk.  In 1880 the Anglican church and school was built as a result of a split in the congregation.  Community involvement in the church remains strong.  The buildings of the village tell the story of its history.  The first church, the parsonage and school, together with the old houses and buildings around the village square have been restored and are in use, as well as the Anglican church building.  All are situated on the main road through the town.

The isolation of Suurbraak is one of its charms and limits the financial resources of the people.  Many still cook on wood stoves, using an abundance of alien vegetation that grows in this area.  The people live close to the land using farming methods that belong to the past.  The smaller farms are still ploughed using horse drawn ploughs.  Agricultural work is often done manually.  Many households own at least one cow and some horses.  Horse and donkey drawn carts are often seen here on the streets. 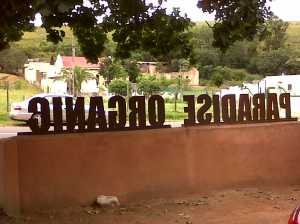 We stopped at a roadside restaurant called “Paradise Organic” and enjoyed an incredible lunch with equally amazing scenery.  That afternoon we headed back up the Tradouw Pass, through Barrydale and back to the Warm Water Mountains to enjoy the recuperative powers of the mineral water.