Day One of the 2011 Road Travel Road Trip

Road Travel took a few weeks out to get onto the road, literally, and explore a good portion of the Route 62, the Garden Route and the Eastern Cape.  What follows here is a record of the fun and adventure madness, from an industry traveller 😉

We enjoyed an early morning departure through the heavy sea mist and low clouds on the Helderberg side of the N2, one of the National Roads of South Africa.  The N2 starts in Cape Town and runs along the eastern side (Indian Ocean coast) of the country through the Eastern Cape, KwaZulu-Natal all the way up to Mpumalanga. 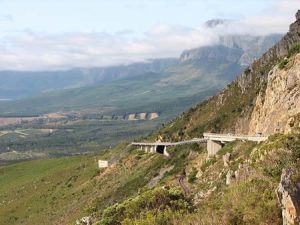 Leaving Cape Town we started climbing Sir Lowry’s Pass, early travellers would not have had an easy time negotiating the Hottentot’s Holland Mountain range which stretches along the eastern side of Somerset West and Gordon’s Bay, providing one of the most awe-inspiring backdrops in the Western Cape.  On a clear day you can view the range all the way from the southern suburbs of Cape Town.  Today Sir Lowry’s Pass allows easy passage across this daunting natural barrier that is also a haunt for bird watchers and nature lovers, the car park (on the western side of the N2 as one approaches the top of the pass) provides a perfect stop to explore the area.  The mountain fynbos is fairly accessible here and one can take three to four hours to explore the mountainside and the lower areas where streams become densely vegetated and provide perfect cover for birds.  Make sure you keep your vehicle’s windows and doors closed, as there are bound to be a few inquisitive Chacma Baboons around ;-).  Halfway up the pass we exited the low clouds, opening up the panoramic view of a white ocean behind us with only Table Mountain rising above the clouds in the distance. 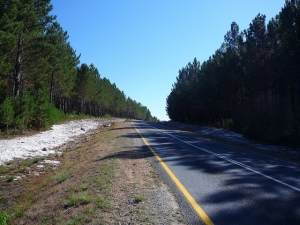 It was not long before we reached our turnoff for Grabouw, this is the commercial centre for what is the largest single export fruit producing area in Southern Africa.  The town was created on the farm Grietjiesgat, acquired in 1856 by Willem Langschmidt who named the place after Grabau, the village of his birth in Germany, his wife opened a little trading store and he was the bookkeeper.  Later he sold parts of his farm and so began the farming community of Grabouw as it was later spelt.  Langschmidt was the father of 23 children, including 3 sets of twins, the population of Grabouw has since risen to 15 993. 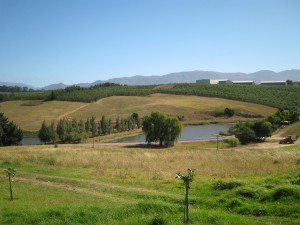 The district, of which Grabouw is the centre, is better known as the Elgin Valley, internationally known as the place in South Africa ‘where the apples come from’.  The Elgin Valley borders the Kogelberg Biosphere Reserve, a protected area of magnificent fynbos, more than 1600 plant species occur here, of which 150 are endemic.  Also known as a forest town with its pine plantations, the pristine environment of Grabouw offers a rich and varied experience to visitors.  The area is well liked by nature-lovers who come to explore its hiking and mountain bike trails and the annual Elgin Festival draws thousands of visitors to its displays of flowers, fruit, wines and great variety of local products.  These products are also available throughout the year at local farm stalls, some of which have become well-known landmarks along the N2 such as the Peregrine Farm Stall, a favourite with Road Travel.  After meandering through a mosaic of apple and deciduous fruit orchards, we reached Viljoen’s Pass, the original pass wound along the mountain slopes east of the river but was replaced in the early 1900’s by a route cutting through the Groenland Mountains along a gorge carved by the Palmiet River, the name of the pass honours local apple pioneer Sir Antonie Viljoen. 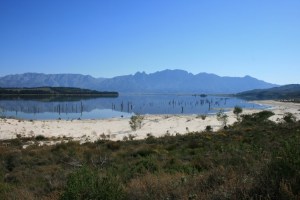 We experienced some delays with film crews when crossing the Theewaterskloof Dam, which was officially opened in 1982 as a backup to the water supply for Cape Town and surrounds.  Water sport enthusiasts will enjoy the Theewaterskloof Dam, the sports club is situated on a peninsula stretching into the dam surrounded by farmlands, majestic mountains and a variety of wildlife.  Aquatic-related activities have a strong following amongst Club members and public visitors and include keelboat, multi-hull and dinghy sailing, power boating, jet skiing, water skiing, kite surfing, windsurfing and fresh water angling.  The dam is the 7th largest in South Africa and covers an area of 5 100ha with a capacity of 483 million cubic metres, when full. 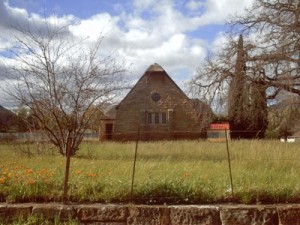 It was not long before we entered the small village of Villiersdorp, also known as the “Pearl of the Overberg”, a tranquil village graced by oak trees and surrounded by fruit and wine farms.  Villiersdorp is a prosperous apple-growing area that also produces pears, apricots, peaches, grapes and onions.  The village is situated in a valley surrounded by the picturesque Waterval and Baviaan mountains.  The town was established in 1843 by Veldkornet P.H. De Villiers and was declared a municipality in 1885, because many of the residents were French Huguenot descendants, the town was named “De Villiers Dorp”. 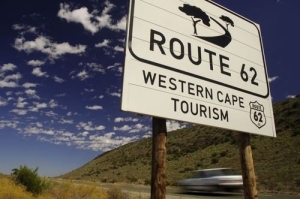 Just before Worcester we cut through and joined the famous Route 62 that meanders between Cape Town, Oudtshoorn, the Langkloof and Port Elizabeth offering a scenic alternative to the N2 highway.  It’s an area of magnificent landscapes and towering cliffs, crystal clear streams and an abundance of trees and indigenous flora.  Route 62 will take you along the longest wine route in the Western Cape and possibly the whole world.  It is an exciting experience, even for the well travelled and is also known as the Mountain Route offering visitors range upon range of striking mountain edifices.  Andrew Bain and his son, Thomas Bain was the engineers and constructors of several of the mountain passes on Cape Route 62.  Michell’s Pass near Ceres, Bain’s Kloof Pass near Wellington, Gydo Pass due north of Ceres up the Skurweberg, Tulbagh Kloof (after the town of Tulbagh), Prince Alfred’s Pass (after Prince Alfred) from Knysna to Uniondale, Tradouw Pass near Barrydale, Garcia’s Pass from Riversdale to Ladismith, Cogmans Kloof, from Ashton to Montagu and Swartberg Pass from Oudtshoorn to Prince Albert. 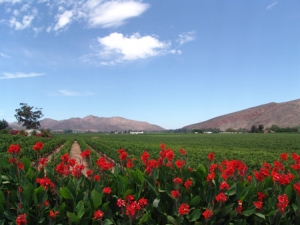 We stopped for breakfast in Robertson, situated in the shadow of the majestic Langeberg mountain range with the Breede River as its lifeblood, Robertson is the western gateway to The Heart of Route 62, with 150 years of history Robertson has grown into one of the most attractive Cape Wineland towns.  Victorian buildings, jacaranda-lined streets, rose-boarded vineyards, columns of red and yellow cannas as well as bright bougainvilleas all form the backdrop to this delightful town. 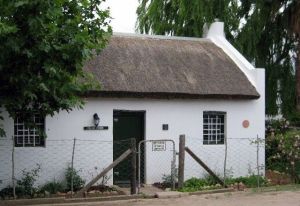 After a hearty breakfast and some ‘essential’ shopping we headed off towards the village of McGregor.  Best described as “the best preserved and most complete example of mid-nineteenth century townscape in the Cape Province”.  Its mild climate makes it one of the most delightful places to spend time during the southern hemisphere’s “cold” months.  Mainly dry, and generally balmy, McGregor’s winters are charming.  And in summer, the constant sunshine makes McGregor a great place to visit for a taste of African heat – in a civilized environment.  That’s McGregor, with its traditional, whitewashed, thatched cottages, its quiet streets, mountains, birdlife, wine, charming and balmy winters, and hot, hot summers. 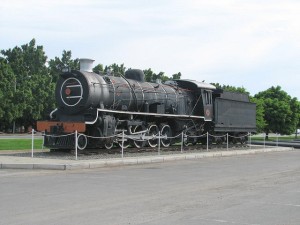 In Ashton, originally known as Roodewal, we stopped for refuelling.  The English speaking official who was in charge of the railway station built there could not cope with the name Roodewal, so he named the station after his home town in England.  The station was built in 1887 and grew into a town only in the 1940s after the Langeberg Cooperation was established near the station.  Grapes and horses are farmed.  The Kogmans River flows through the mountains along the road to Montagu, the Gateway to the Karoo. 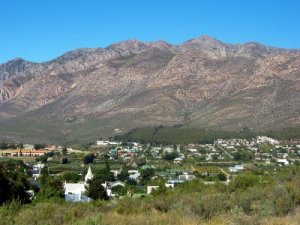 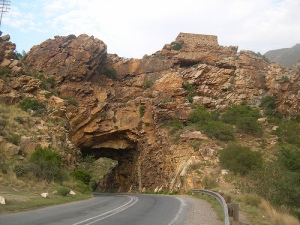 Montague is a village with soul, here you will find a community of smiles and sunshine, people who ask how you are – and wait for the answer, people who quickly progress from acquaintances to friends.  Once voted Village of the Year, not only for the gorgeous views, beautiful architecture and excellent Hot Springs – but for the homeliness and hospitality of the people that set it apart from the rest.  A stroll through the village will introduce you to its fascinating architecture and historic buildings.  You can enjoy some of the best-preserved homes from the ox-wagon days just along Long street – in fact they have more national monuments in one street than any other town in the country.  There’s an interesting heritage, once upon a time, they even had their own currency.  We stopped at the local butchery in the main road to pick up some Karoo lamb chops for a braai that evening, one thing about small town butcheries is the amazing service you get, and the generous cuts.  With our dinner in hand and a few litres of ice cold fresh local fruit juice we headed out of town towards Barrydale. 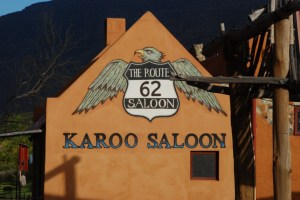 Barrydale’s history dates back to the early 18th century when farmers moved into the area looking for fertile arable land with water.  The Dutch Reformed Community of Barrydale came into being in 1878 when land was purchased to build the church, in the days before the main community church was built there were a number of ‘nagmaal’ houses (houses where Holy Communion could be celebrated) and a school, but not much else.   As the farmers in the area were encouraged to plant vineyards and orchards, it was natural that a winery and distillery would eventually be built.  In 1940 the Barrydale Koöperatiewe Wynkelder was formed and a distillery established giving rise to the wine industry in the area.  Joseph Barry Brandy, produced locally, was voted best brandy in the world in 2003.  Over the years the village grew and eventually a municipality was established in 1921, today there is an estimated population of 3500 permanent residents.  The local traffic officials were visible as we entered town, artist’s shops and some very interesting deli’s and restaurants lined the street.

A few minutes drive outside of town, in the direction of Ladismith the road opens up in true Karoo fashion, vast semi arid landscapes encircled by moody mountain ranges.  Here, in the most unlikely of places you will come across a peculiar roadside attraction, the renowned Ronnie’s Sex Shop, this is simply a must.  When you pass it is well worth the time to stop and order a drink in this very unique Karoo pub.

Leaving Ronnie’s Sex Shop we headed towards our first nights accommodation at a legendary little hot spring with wondrous waters to enjoy the recuperative powers of some of the best quality hot mineral water in the world.  Be sure to see the next posting in the “On the Road” category, we will be giving you a review of this special little place.