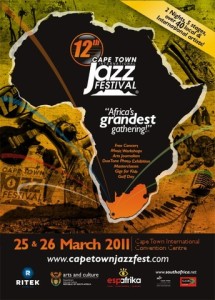 Since Jacob Zuma mentioned this festival in his state of the national address yesterday, we thought it a good idea to remind all our friends and followers.

The Cape Town International Jazz Festival has grown into a hugely successful international event since its inception in the year 2000.  Attendance figures have increased from the initial 14 000 to 34 000 in the last 11 years. Melodytrip has ranked this proudly South African event as No.4 in the world, outshining events such as Switzerland’s Montreaux Festival and the North Sea Jazz Festival in Holland. 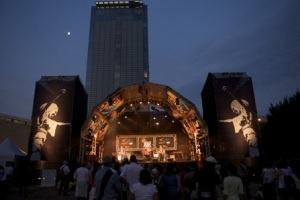 Known as Africa’s Grandest Gathering, the festival which will be in its twelfth year when it takes place on Friday 25th and Saturday 26 March 2011 at the Cape Town International Convention Centre. Once again Cape Town International Jazz festival will thrill loyal and new fans with world class music. The Cape Town Jazz Festival is an important international event that has a long history within our democracy.  In fact, it is an event that really celebrates the triumph of our country through its multi-cultural, multi-national line-up.

People from far and wide come to our city to listen to the legends of jazz and Cape Town itself is so much richer for the presence of these talented people. The community concert, part of the build–up to the 12th Annual CTIJF will again this year be held at Green-Market Square. This well-attended event will start at 5pm on 23 March 2011 and features some of the top headliners that will also be performing at the Jazz Festival.