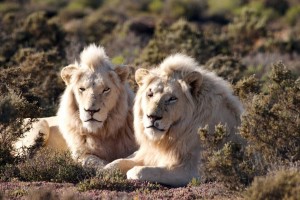 Sanbona Wildlife Reserve is home to the only free-range white lions in South Africa. The historic predator release means that for the first time in over 200 years, lion and cheetah can once again be seen in the Klein Karoo, making Sanbona the first private game reserve in the Western Cape to play host to free-roaming big cats. At the foot of the Warmwaterberg, in the heart of the Little Karoo, between Montagu and Barrydale on the famous Route 62, 54 000 hectares of undulating mountains and plains, indigenous fauna and flora, rock formations and rock art make this a destination not to be missed.

Set in the incredibly picturesque scenery of the Barberton Mountainland, Nkomazi Game Reserve lies in the malaria-free parts of Mpumalanga closest to Barberton, the Kruger National Park, Pilgrims Rest and such wonders as the Blyde River Canyon and God’s Window. Nkomazi, which means ‘place of water’ is set in the area also known as the ‘holy grail of geology’ for its wealth of ancient fossils – some of the oldest in the world. Its position in the Barberton Mountainland lays claims to a plant biodiversity higher than that of the entire Kruger National Park and second only to the Cape’s fynbos and succulents.

Nkomazi has been restored to a wildlife haven. Here, where great natural beauty and the 3.7 billion years of history meet, the Nkomazi conservation project has celebrated the return of wild animals to a region where they can once again roam in great abundance. Jaci’s two exceptional, privately owned lodges will exceed all your safari expectations. Situated in the Malaria Free Madikwe Game Reserve boasting 75,000 hectares of “Big 5 territory.’ You can expect to see Wild Dog, both Black and White Rhino, extensive plains game, including Sable, Gemsbok, Springbok and Giraffe, as well as over 340 species of birds. Jaci’s Safari Lodge and Jaci’s Tree Lodge, invite you to share the wildness of Africa in the exclusive luxury. Between the early morning and evening game drives and walks, there is a cool swimming pool overlooking the river. Paddle your own canoe, lie in a hammock, sip an ice-cold drink, watch the birds, the butterflies and beasts, relax, unwind. The day, the place, the ambience are yours, in peace.

Pretoria – often called the Jacaranda City after the magnificent lilac trees, which line its streets – is undoubtedly one of the world’s most attractive Capitals. Perfectly situated with sweeping views across the lawns of the magnificent Union Buildings the Sheraton Pretoria is within the immediate vicinity of more than 100 embassies, shopping centers, as well as the Reserve Bank and most government ministries. The Sheraton Pretoria exudes an atmosphere of elegance and sophistication, from the impressive marble lobby to the exclusive Towers reception desk and lounge. Guests can relax in luxury in the Sheraton Pretoria hotel’s exclusive hotel accommodation and be sure that their every need is catered for.

Luxury takes on a new dimension aboard The Blue Train. A warm-hearted welcome begins a journey that is defined by personal attention and devotion to service and detail. Enjoy a welcoming cocktail and appetizing delicacy served from a butler’s silver tray. Now the stage is set; step on board and settle into your private suite. The route between Pretoria and Cape Town is a 27-hour journey of 1,600 kilometers (994 miles), through some of the most diverse and spectacular scenery offered by the African sub-continent. The train departs from Pretoria main train station at 8h50AM and arrives in Cape Town train station at 12h00PM the following day. En route to Cape Town there is a stopover and excursion in Kimberley, where you’ll take a step back in time to the days of the diamond rush. Situated in the heart of the Cape’s oldest wine region, The Last Word Constantia is an elegant and luxurious boutique hotel offering a unique and special holiday experience. Great attention is paid to peace and tranquility. An inviting sunken swimming pool and surrounding tanning deck is the focal point of the magnificently manicured garden with rolling lawns, vibrant colors and exquisite mountain views. The lounges, dining area and sun patios all open onto the garden. The attention to detail in the extravagantly, well-appointed en-suite bathrooms is a feature of The Last Word Constantia. Eight luxurious and stylishly appointed suites offer unconventionally spacious accommodation, extraordinary comfort and open onto private patios leading to the garden and pool. Offer includes complimentary transfer to or from The Last Word Constantia to Cape Town Station & complimentary transfer from Sheraton Pretoria to Pretoria Station Valid from 1 May till 30th Sept 2011